So still not had much time to be studying CCNP, but have been getting my hands dirty on C# around the automation of generating configuration for cisco devices.

As mentioned before part of my job is change management which means a lot of repetitive configurations. In the past the tools I have written in VB and Excel have been limited to a single master config, what I decided was needed was a tool that could take a generic config written in notepad or other simple text editor and present the variables to the end user in a friendly form, for them to complete and generate the config. 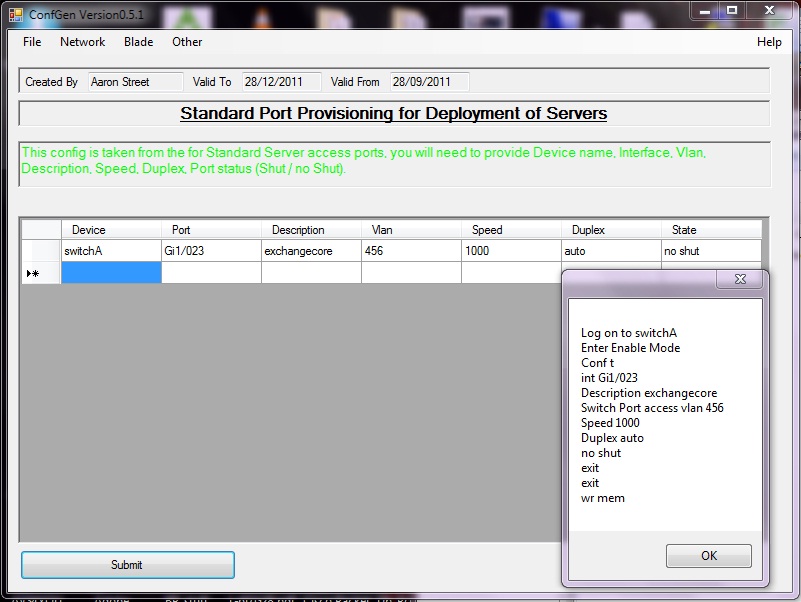 This is currently has a simple template loaded for changing the vlan and description of a port and enabling / disabling it. But the application is flexible to be able to take any length or complexly of config you can enter.

There are still lots of things to tidy up,

currently only the first row of variables entered can be parsed in to a complete script, I also want to eventually use a word template to give a professional output for the final script. And have a menu driven system that will look for files in a specified folder at start up and load them ready to be picked by the end user.

However its a start and the core of the application is working. I would say its still very much a Beta version, but am hoping over the coming weeks and months to develop it in to a much more compete tool. A few bugs to resolve and functions to add but I hope it gives people an idea of what i am looking achieveive.

I also have a stage 2 idea to add to this that will make it even mousefulull for new deployments to build up complex configurations, as well as these simple snipits.

If any one wants to try it out the zip file is below, simple extract to a folder and run, file >> open. to open the included example. (you will need .net version 3.5 framwork installed to run it)

Please play around and let me know what you think.

Edit: added page to site to keep track of this tool and its development, see above.